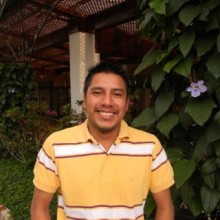 Wilson was working as a community development technician and a project administration technician at Universidad Galileo when he became a Fellow.  This young indigenous leader is quite active within his community.  He supported a group of women on how to work with young people in their community and worked with a reproductive health network. He has a certificate in gender violence from the Universidad Autónoma of Madrid, and is in the process of finishing his Bachelor’s degree in Project Administration. Wilson is fluent in Spanish and Kakchiquel. His goal is to continue studying Business Administration, and to build a group of young people with the group of women he supports in San Andres Semetabaj. In the long term, he would like to form his own organization, focusing on gender and SRH topics.  When he was selected as a Fellow at GOJoven, Wilson was 24 years old. 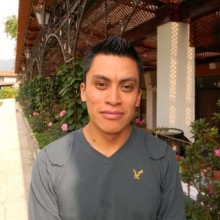 Erick was 28 years old when he was selected as a GOJoven Fellow. He was working for a program of the Committee for AIDS Prevention Educators (COEPSIDA) on SRH and HIV/AIDS education within the Department of Education at Sololá when he was selected as a Fellow.  He coordinated trainings in these topics for teachers, students, and young people with NGOs, and the Ministry of Health.  Erick would like to have an influence in the education department and the education sector to develop an SRH network that includes a process to develop young leaders in all municipalities, both at basic and diversified levels. Erick is fluent in Spanish and Kaqchikel. His short-term goal is to finish his thesis and graduate in Business Administration. Currently, he works for the Department of Education in Sololá as Assistant to the Educational Delivery Section and liaison for the Education for Peace Program (EDUPAZ).

Milo is the founder and current President of the youth group AJPU in San Lucas Toliman in the south of Atitlan Lake in the Department of Sololá. This group is a member of the Maya Peoples Federation (FEDEMPA) from the Network for the Defense of Food Sovereignty of Guatemala (REDSAG). As a young indigenous leader, Milo works with topics of the Maya cosmology, permaculture, and environment, as well as public advocacy issues. He has social vision, a conviction to work with youth, and knowledge of community organization and participation. He graduated from Colegio Integral Toliman (CIT) as a Primary Education Teacher in 2003, and would like to study Sociology. Milo was 28 years old when he was selected as a GOJoven Fellow. 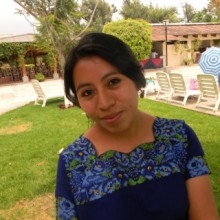 Sara was working with PRODESCA, an organization that provides community health care services, as a facilitator of services for women when she became a Fellow. Sara has worked as an instructor for women’s networks in SRH, nutrition and basic health care topics. She has also received several trainings in community organization, mental health, and diagnosis. This multi-lingual indigenous leader speaks fluent Tz’utujil and Spanish, as well as basic English and Kakchiquel.  Sara studied nursing, and wishes to attain her professional degree.  Her goal is to travel to other places to study and broaden her knowledge in her areas of interest.  When she was selected as a GOJoven Fellow, Sara was 22 years old.

Bony was working at the K’ak’a Naój Association for Women’s Development promoting women’s integral development in the Department of Sololá when she became a Fellow.  This young indigenous leader has had different roles defending women, including teaching adult literacy, as an election monitor in public elections, and participating as a board member for different women’s groups.  She has also participated in activities and meetings with young people, and in a Latin American meeting for Sexual and Reproductive Rights. Bony is fluent in Kiche, Kakchiquel, and Spanish, and holds a degree as Kiche-Spanish Bilingual Primary Education Teacher. She later studied to become a secondary education teacher in social sciences.  Her long-term goal is to teach social sciences and natural sciences to young people, and to work towards the prevention of teenage pregnancy.  She is devoted to fighting for women to be able to present initiatives and participate more strongly in the Municipal Development Council (COMUDE). Bony was 29 years old when she was selected as a GOJoven Fellow. 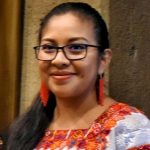 Jessica is currently the Executive Director for GOJoven Guatemala. She was 21 years old when she was selected as a GOJoven Fellow, while working as the Network Coordinator at the Municipal Office for the Protection of Children and Adolescents, where she followed up on reports of human rights violations of children and teenagers in Panajachel.  Jessica graduated from Youth Networks, an organization that works in politics, environment and communications. She has served as Sexual and Reproductive Health Program Coordinator for Asociación Amigos de Santa Cruz, in Sololà. This young indigenous leader is currently studying Business Administration and is fluent in both Spanish and Kakchiquel. Since she was a Fellow, she has long aspired to start an organization with young graduates from youth networks, to benefit children and teenagers.