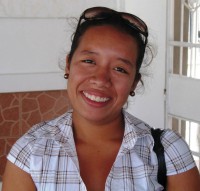 Daisy Magaña (Belize 2009) received a full scholarship from the Johns Hopkins School of Public Health to attend the International Family Planning Conference in Dakar, Senegal. While at the conference, Daisy participated in a panel discussion on the connection between SRH and the environment; presented in a session on improving SRH in Latin America; and met with various organizations, including Johns Hopkins, Restless Development (a youth-lead development agency in Zimbabwe), Sonke Gender Network (in South Africa), Population Action, Pathfinder, and the Population Reference Bureau.

Daisy was featured in an article on the Woodrow Wilson International Center for Scholars’ website, along with fellow panelist from the SRH and environment session, which included Population Action International’s vice president of research and director of the climate program, Sierra Club’s global population and environment program director and Worldwatch Institute’s president. The article highlights Daisy’s simple message when it comes to advocating for sexual and reproductive rights and the environment: Don’t give up.

To read the article:
http://www.wilsoncenter.org/event/reaching-out-rio-explaining-population-growth-and-family-planning-to-environmentalists-dakar

Hector Cima was selected as a Fellow at age 29 while working in Felipe Carillo Puerto community health worker for Amigos de Sian Ka’an, the most important environmental NGO in Quintana Roo. With his Mayan language skills, trusted position in the community, and work at an environmental NGO, he has the ability to communicate important […]