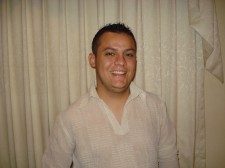 Israel Antonio Barahona Reyes is currently Program Manager at the Asociación GOJoven Honduras, where he supports the organization’s many programs including ZonaSegura in partnership with USA based organizations YTH and PHI. Antonio completed his Bachelor Degree in Psychology at the Catholic University of Honduras. He became a GOJoven Fellow at age 20 and has been a dynamic and charismatic volunteer at the Population Services International-sponsored Club en Conexion in Tegucigalpa.  Antonio has worked as a facilitator at the Club, where he has trained peer educators and monitored their work to educate youth on sexuality and reproductive health. With a true commitment to working with youth, Antonio hopes to one day manage radio programs that inform young people about sexual and reproductive health. He believes that each person is born a leader and wants to help develop their potential.