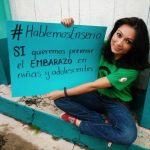 Esther Barajas was selected as a GOJoven Fellow in 2006 at the age of 18. Her activism in adolescent sexual and reproductive health (SRH) began while serving as a volunteer with the Red Cross at the age of 13. She started working with Asociación TAN UX’IL in 2007, an organization dedicated to promoting adolescent and youth SRH in Peten, Guatemala, joining as Youth Prevention Services Coordinator, and later taking on the role of Public Relations Coordinator for the Yeny Mendoza Leadership Academy, and then Coordinator for the Community Access to Contraceptives Program. Esther is currently the Coordinator of the TAN UX’IL Health and Leadership Program, as well as President of the Board of Directors of Asociación GOJoven Guatemala, and Psychology Professor at San Carlos University of Guatemala-Peten Branch. She has a degree in Clinical Psychology from Mariano Galvez University thanks to the Summit Scholarship from the Summit Foundation and a GOJoven Training of Trainers certificate. She studied Public Policy Monitoring and Evaluation and received a scholarship to study Professional Leadership with the Guatemalan Leadership Association (ALG) in 2015. Esther is about to complete her Master’s degree in Mental Health and Clinical Psychology and is very dedicated to eradicating pregnancy and sexual abuse in girls and adolescents and to ensuring adolescents have access to differentiated, youth-friendly SRH services. She also works closely with the media (radio and television), including playing the role of Elena on the radio show “Between Two Roads” by Fundación Pro-Petén and working for the Guatemalan radio program “Código 0”.

Rudolph Khendis Ellis is a dedicated young leader from Orange Walk who was a high school English teacher when he was selected as a Fellow in 2004.  Khendis has experience working in literacy and HIV/AIDS issues.  In 2006, Khendis received a Summit Scholarship to complete his Bachelor’s Degree in Education at Grambling State University (GSU), where he graduated […]