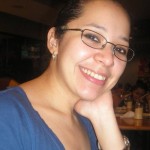 Gabriela Flores Rodríguez was selected to be a GOJoven Fellow when she was 22 and was part of the Adolescent Sexual and Reproductive Health Initiative – AIR in 2009. She has served as Technical Secretariat for the Latin American and Caribbean Youth Network for Sexual and Reproductive Rights (REDLAC), where she took charge of the network’s communication strategy and IT management. Additionally, she founded the Young Women’s Association “Being a woman” (Ser Mujer) in Honduras.  She has served on the Board of Directors of the Central American Women’s Fund (FCAM) and has worked as an advisor to the Secretary of Education where she developed an information system for the educational system. Gabriela is a lesbian feminist who participates in many forms of political advocacy, training, research and promotion of Women’s Human Rights and LGBT Rights.

Luís Joel Rivera Perdomo, selected as a GOJoven Fellow at age 22, had extensive experience in popular theatre. As an actor and theatre workshop teacher, Luis worked with the Tegucigalpa Theatre Workshop Association and the Cultural Association RIMAS, an organization that executes projects focused on the prevention of HIV/AIDS. Having toured throughout Honduras, the focus of his work was promoting popular theatre methodologies in the prevention of HIV/AIDS and giving voice to people living with HIV/AIDS. He worked with Garifuna communities on developing popular theatre productions and providing theatre training.

Luís passed away in July 2017. GOJoven honors his memory and life’s work with art, advocacy, and capacity-building to fight for the human rights of youth in Honduras and Mesoamerica.

Licda Nory Álvarez Betancourth was 25 years old when she became a GOJoven Fellow. She is currently the Executive Director of the GOJoven Honduras Association, of which she is a founding member. Licda has a degree in Public Accounting and Finance from the National Autonomous University of Honduras and has worked for 13 years in the area of internal auditing. Licda is passionate about social justice issues and defending the rights of women, children, adolescents, and youth, especially in her volunteer work with youth from marginalized communities. She previously served as board member of the National Council of Honduran Youth Population (CONJUPH) during the period 2005-2010; represented the CONJUPH in the Alliance for Children, Adolescents and Youth; and participated in advocacy processes for the approval of the Framework Law on Youth and the creation of the National Youth Institute. Licda has also facilitated HIV/AIDS Prevention, Autism, and Women’s Rights campaigns and workshops, as well as projects with blind youth and helped to manage funds for projects for children and youth of the Col. Las Torres.