Ariadna has a Bachelor’s in Psychology and became a GOJoven Fellow when she was 21 years old.  She worked with an organization called Sexuality and Health Service Education (SEEDSSA) in education around sexuality, gender perspectives, violence, and promotion of sexual and reproductive rights. During this period, she collaborated on a SEEDSSA project funded by the Summit Foundation called, “Comprehensive Social Center for the Sexuality of Adolescents and Youth (CHISPAS)” in Cancún, where she supported the development, implementation, and monitoring of diverse projects related to the sexual and reproductive preventative health of adolescents and youth.  In this center, she served as an educator, speaker, and spokes-person for sexual and reproductive rights.  Ariadna has a Master’s in Education.

Mayra was 26 years old when she became a GOJoven Fellow.  She is a native of Quintana Roo where she coordinated the recruitment and hiring of personnel at Xel-Ha, an eco-tourist water park near Tulum with over 500 employees. She was a certified trainer within Xel-Ha, acting as the primary instructor of quality assurance and health services, and has been invited to be a trainer in the park’s new internal Drug Prevention Program. She was an active member of the park’s Gender Equity Committee.

Aide became a GOJoven Fellow at age 26.  She is a social worker for the Mexican Institute of Social Security and lives in Quintana Roo. She has acted as a counselor for young people and their parents in Cancun through a municipal court-run service program for youth offenders. Aide oversaw the family planning and reproductive health program of the Institute in peri-urban areas of Playa del Carmen for a few years prior to being based out of Cancun. In this capacity, she has supervised educators who make home visits to provide counseling and contraception to youth and families. Aide is committed to social change, and passionate about working to improve the sexual and reproductive health of the youth and women of Quintana Roo, Mexico.  She received the Summit Educational Scholarship in 2007 and completed her Master’s Degree in Psychology and Family Therapy at the Universidad del Mayab in Yucatán. 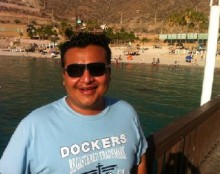 Marco holds a bachelor’s degree in law and currently is the Director of the Human Rights unit for the Attorney General of Quintana Roo, México.  In this position, where he began working in June 2011, he has worked as an advisor and trainer, and has addressed human rights complaints.  Also, Marco continues his career as an advisor to youth and youth NGOs in the northern area of Quintana Roo, collaborating with them as a trainer and author of human rights articles.  Marco is also the local coordinator for a program in Cancun called International Youth Career Initiative.  There, he works to empower at risk youth through job skills training and personal development.  Marco defines himself as a feminist and has worked as a trainer in masculinity, eradication of homophobia, sexual diversity, discrimination, HIV and AIDs, and youth empowerment since 2004.  Marco was 25 when he became a GOJoven Fellow.