In 2010, GOJoven and the Center for Digital Storytelling’s Silence Speaks initiative began the Youth Leaders Speak project, which emphasizes the importance of personal narratives as tools for education, youth mobilization, and advocacy on behalf of adolescent sexual health and rights. Through the project, GOJoven and Silence Speaks led two digital storytelling workshops with selected GOJoven Fellows who came together in four-day sessions to record first-person accounts of what led them to the field of youth health, collect images and video clips with which to illustrate their stories, and learn how to edit these materials into the short videos presented here.

The content of many of the Youth Leaders Speak stories is very sensitive – they touch on issues like HIV and abortion stigma, grief and loss, and violence and abuse. They are not suitable for viewing by young children. GOJoven and Silence Speaks highly recommend that if you wish to screen the stories, you make use of the project’s “Guide for Facilitators,” which offers a wealth of useful information for how to integrate the digital stories starting point for sharing stories as tools for provider training, community health education, and advocacy related to improving adolescent sexual and reproductive rights. Our hope is that those who view these powerful stories will be inspired to take individual and collective action towards building safe and healthy communities.

If you’re thinking of screening these stories, please:

Jacinta, a young Mayan woman, grew up in an indigenous village in the countryside of Quintana Roo, Mexico. When she was 11, she was forced to move with her family to the city, where they faced discrimination and numerous challenges. Jacinta speaks in her story about how her father did not value her or her sisters because they were girls. She persevered and urges other women to take a stand for their rights.

Roberto and his wife, both Mayans from rural Guatemala, lost a baby when they were in their teens, due to the lack of reproductive health education or adequate prenatal care in their community.Roberto talks in his story about their youthful romance and their grief; his moving story points to the need for information and services related to sexuality, contraception, pregnancy, and childbirth.

Although Gabriela grew up in a safe and happy environment, she always felt different from other girls. As a teenager, she fell in love with a friend and was consumed by insecurity, shame, and guilt. In her story, Gabriela shares the decision she made to be honest about her sexual orientation, and how this enabled her to finally accept herself.

Omar, a Mestizo man from rural Belize, has had a loving relationship with his mother throughout his life. He grew up thinking that he was a part of a perfect family, and only later learned about how his father mistreated his mother. Facing the path carved out for him by his father and his strong bond with his mother, Omar shares in his story how he wants to behave within his own family.

Nekeisha is a young Belizean woman who became pregnant at an early age, due to a lack of information about sexuality and conception. She speaks in her story about the life she used to lead as a teenager free of adult responsibilities, and of how she became involved with a much-older man. After a miscarriage and in spite of his objections, she decided to carry her second child to term.

David and his partner, an older man, were happy until discovering they were both HIV-positive.David had known little about the importance of safe sex. In his story, he tells of his efforts to take care of his partner and live a normal life. On August 19, 2010, a few months after making this digital story, David died of advanced HIV. His story is included as part of the Youth Leaders Speak collection as a way of honoring his memory and his tireless efforts to advocate for the rights of people living with HIV.

Coming from a family with strong cultural values about reproductive health, Elisa was faced with the challenge of an early pregnancy and limited options. She describes in her story the pain of having a back-alley abortion and its impact on her fertility.

Esther, a young Mestiza woman from rural northern Guatemala, grew up enjoying school and hoping to get a doctorate in public health. She faced a number of challenges in pursuing her dreams, including discrimination against women, poverty, and a lack of sexuality education. Esther shares in her story how she overcame these obstacles and acted as the primary supporter of her family.

Errol’s childhood became a struggle when his father was laid off from his job. Errol’s father began drinking and using drugs, which left the family with little money for food and school tuition. Errol describes how his classmates bullied him and how everyone thought he would grow up to be just like his father.

Licda grew up in poverty, in Honduras. She remembers in her story the way that women in her community were treated: with harsh words, persistent discrimination, and violence. After making the decision not to marry, Licda met a different kind of man. They married and now work together, supporting youth volunteerism and empowerment.

From a young age, Alex knew that he was gay but was unable to be completely open with his family members. He faced great fear and endured family hardships as a result of their response to his sexual orientation. In his story, Alex explores cultural views related to LGBT people as well as the importance of sexuality education and the role of advocacy for LGBT rights.

Gladys always felt alone and out of place, as a child and teenager. Her mother treated her poorly due to her dark skin color, saying she didn’t deserve an education. Gladys’ body image also affected her self-esteem. She speaks in her story about her quest to understand why she had begun to cut herself and hit walls until her hands bled. After joining GOJoven and connecting with friends, Gladys had the courage to pursue an education and accept herself as she is.

Wilma, a young Mayan woman from Quintana Roo, Mexico, lived in poverty during her childhood. She looked up to her mother, who constantly supported Wilma and worked tirelessly so that she could have the opportunity to go to school. In her story, Wilma examines discrimination against indigenous women and highlights the strength and courage of her mother’s efforts to provide opportunities for her children.

Jorge grew up with his father’s parents, who verbally abused and beat his mother. When Jorge’s father returned home from the United States, he began to beat Jorge. In his story, Jorge talks about the many scars he grew up with, as a result, and about his decision to pursue education in human sexuality. At first, his parents did not approve, but eventually they supported his work. 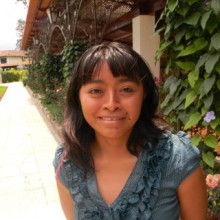 Lidia is a young indigenous leader who speaks Maya and Spanish, is deeply attached to her culture, and wishes to work for the betterment of women in her community.  She has participated in trainings about youth leadership provided by the National Commission for the Development of Indigenous Peoples. She is an opinion leader within her […]