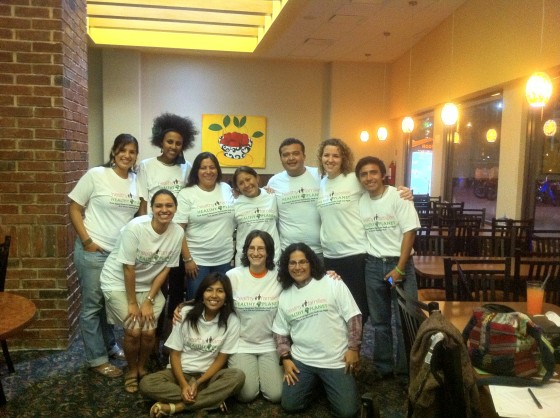 With international leaders currently gathered at the United Nations Framework Convention on Climate Change (COP19) in Warsaw, Poland to negotiate and develop policies and procedures to address climate change, it seemed the perfect time to explore the connection between the issues of reproductive health and environmental degradation and our Youth Leadership in Sexual and Reproductive Health Program’s (GOJoven) work to address both. Typically treated as separate fields of work, we believe that environmental degradation (ED) and lack of access to reproductive health (RH) education and services are actually interwoven issues that negatively impact each other and the health and well-being of the most marginalized populations in developing countries, including women, girls, youth and adolescents, and indigenous, poor and rural peoples.

Fellows of PHI’s GOJoven program are seeing firsthand how rapid population growth and lack of reproductive health are impacting the environments in their local communities. In her essay “Cancun: A Lost Paradise”, part of a larger anthology entitled A Pivotal Moment: Population, Justice & the Environmental Challenge, Adriana Varillas, a journalist and GOJoven fellow from Mexico, explains that the consequence of rapid population growth in Cancun is the destruction of natural resources to make way for development to respond to increased tourism and a growing population. Saúl Paau Maaz, a GOJoven fellow from Guatemala, tells a similar story to Varillas in an article on the impacts of population growth on his native Petén. According to Maaz, multinational companies and sprawling human settlements are destroying the forests. He calls the jungle where he was born a “disaster area” that’s been “plundered and exploited”, that every year, 100 to 150 square miles of forest are lost.

In both Cancun and Petén, Varillas and Maaz note that the local population lacks access to sexual education and resources to plan their pregnancies and the use of condoms and other contraceptive methods are still stigmatized. And as the population grows, so does the use of natural resources. And although population growth in these countries is not responsible for climate change, local population growth due to lack of access to sexual and reproductive health education and services can negatively affect the population’s ability to adapt to climate change or to mitigate it’s effects.

In 2010, at the 16th UN Climate Summit in Cancun, Mexico, PHI’s GOJoven program was one of 13 organizations, including the Sierra Club and the International Planned Parenthood Federation, that developed the COP16 Policy Statement, titled: Global Youth Support Sexual and Reproductive Health and Rights (SRHR) for a Just and Sustainable World.

The statement, presented by GOJoven and the youth attending COP16 was based on the fact that at least 215 million women worldwide want to limit or space their births, but don’t have access to modern family planning methods. UNFPA estimates that this unmet need for family planning is twice as great for young people. It also demanded that an effective approach to climate change mitigation and adaptation must support young people’s sexual and reproductive health and rights (SRHR), as doing so is essential for adaptation while contributing to reducing the impact of future climate change.

In addition to working side-by-side to develop the COP16 Policy Statement, GOJoven fellows helped facilitate the Council on Youth (COY) pre-conference to the COP 16 and actively participated in COP16.  GOJoven has also worked for many years with the Sierra Club on the Sex and Environment Tours, with GOJoven fellows visiting college campuses throughout the US to engage US students on the topics of reproductive health and environmental protection. Sierra Club joined GOJoven in Guatemala to train additional youth leaders on the connections between population and the environment. See video here.

Currently, GOJoven fellows in Mexico, Belize, Guatemala and Honduras are engaging youth and collaborating with community groups, local organizations and the media to see that young people in these countries, and globally, have access to sexual education and resources to plan their pregnancies. And the GOJoven Belize Alumni Association (GOBelize) has as core to it’s mission to prepare the next generation of leaders in sexual and reproductive health and rights and environmental conservation. GOJoven will continue to work to link these important issues, fighting to support youth SRH as an important strategy for climate change and mitigation. We look forward to joining COP20 in Peru in 2015!

To support the work of GOJoven fellows to continue to put reproductive health at the forefront of the climate change discussion, consider making a contribution by clicking on the donate button below.

Blanca Estela Ical Bolóm became a GOJoven Fellow at age 18.  She went to high school at the Mayan Educational Institution Ak Tenamit, Izabal where she focused on sustainable tourism. A dynamic, proactive, indigenous Queqchí woman, Blanca is seen as a leader within her community. She volunteered as a youth promoter in Ak Tenamit’s HIV […]