“With the creation of the new GOJoven Network, GOJoven takes another step forward in its history and seeks to strengthen its actions via regional and international collaboration.”

Belize City, April 2017— Leaders from the GOJoven Guatemala, GOJoven Mexico, GOBelize and GOJoven Honduras Associations convened in Belize City on April 8th and 9th, 2017, to dialogue and build consensus around the creation of a new, formalized GOJoven Network. The Network is made up of the four GOJoven Associations, which committed to sustaining it through the active participation of their members, employees and volunteers. Together they are dedicated to redoubling their efforts to promote comprehensive youth development in the Americas, with an emphasis on sexual and reproductive health and rights and human rights. 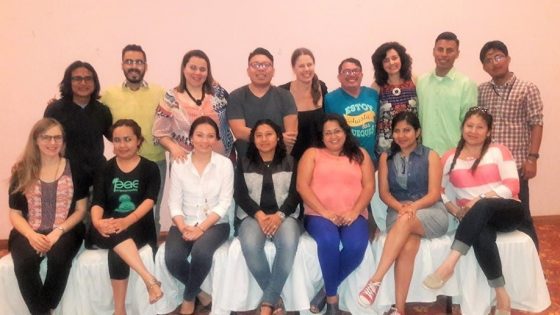 The new Network will operate based on the same values that guided the GOJoven Program during its more than 13 years of work in the region, namely: We can change the world by investing in youth; different points of view make us stronger; and systems change when youth get involved.

Taking into account the four GOJoven Associations’ common objectives, priorities and history—having been founded by alumni of PHI’s GOJoven International capacity-building fellowship program–, the creation of this formal network was seen as an important next step for GOJoven. One of the Associations’ common priorities is addressing and reducing the major inequities in sexual and reproductive health and rights (SRHR) that youth face in the Mesoamerican region. This strategic decision was based on the results network mapping, a SWOT analysis, and surveys and interviews conducted with internal and external GOJoven stakeholders.

While the SRHR challenges posed by the current local, regional and international political and financial contexts may make progress on these issues difficult, they also represent an opportunity for the GOJoven Network to use its over ten years of experience to push for unmet needs to be addressed. With this goal, the Network seeks to bring visibility to and strengthen the joint efforts already underway by its members, by way of the following initial objectives:

Currently in their strategic planning phase, the Network will begin to o

perate officially in June 2017, with the implementation of its governance structure and work plan. During the current interim period, each GOJoven Association will continue to be represented by those who attended this founding meeting: the Executive Director, a Board of Directors member, and another alumnus member of each respective Association, by which they were selected. The following people also participated in this founding meeting to provide technical assistance: Esther Tahrir and Susanna Moore, GOJoven International Director and Project Manager, respectively, who lead GOJoven International at the Public Health Institute; Kathy Hall, Program Director at the Summit Foundation as GOJoven funder; Ricardo Baruch as SRHR network expert and facilitator; and GOJoven Evaluator, Julie Solomon.

Nery Felipe Sánchez Murillo has worked for many years in the Atlantic Coast Regional Delegation of the National Commission for Human Rights (CONADEH) in the promotion and training area, coordinating with different organizations that work in the areas of HIV/AIDS, human rights, and sexual and reproductive health. He has also been a volunteer at the […]