Puerto Lempira, La Mosquitia, Honduras. In Honduras, we seldom hear about the work of indigenous women who struggle daily for the most vulnerable people in the country, risking their lives defending their community’s rights. One such woman is Griselda María Martinez, a Honduran leader seeking to change the history of La Mosquitia through her work as an activist and defender of human rights.

Coming from very humble origins, but with tenacity and unique strength that have kept her committed to her community and fight to defend other voiceless women, Griselda knows what it means to be resilient in one of the most inequitable departments of Honduras. She lives in Puerto Lempira, but gets around Gracias a Dios by walking, canoeing, boating, or flying to reach remote communities. She makes this effort in order to advance the human rights of the inhabitants of this community, to whom she affectionally refers to as “my people.”

“GOJoven prepared me for leadership”

Griselda joined the ranks of GOJoven International eight years ago with the dream of developing herself as a woman, professional, Miskita, and Honduran. Looking back, her dreams have been fulfilled – “Since joining GOJoven, my life has changed significantly, both personally and professionally,” says Griselda. “I learned to develop leadership skills I was not aware existed within me.” 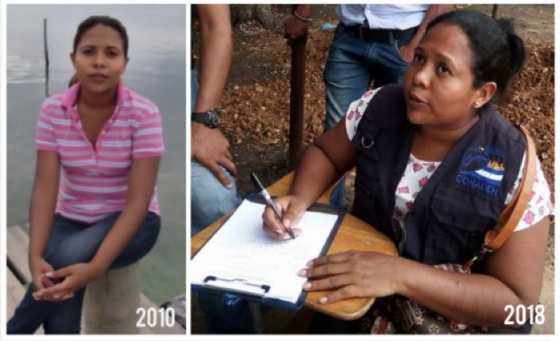 Griselda Martinez when she became a GOJoven Fellow in 2008, and now working with GOJoven in 2018.

Thanks to funding from GOJoven International, Public Health Institute (PHI) and the Summit Foundation, Griselda had the opportunity to continue studying with the Summit Scholarship Program (CIMA). For Griselda, as well as for hundreds of GOJoven members in Mexico, Guatemala, Belize and Honduras, the skills that they gained in the program have long-lasting, beneficial impact. Among other capacities, she learned how to facilitate interaction with people of all academic levels or social backgrounds. “I learned about active listening,” adds Griselda, “It’s important to listen before giving an answer.”

Over time, Griselda became one of the founders of the GOJoven Honduras Association, where she held the position of treasurer for five years. Along the way, she continued developing her personal and professional capcities in order to help others. She addressed each of the association’s challenges and learned how to handle the significance of leading GOJoven, where she has an often overwhelming amount of financial and human responsibility, without receiving pay. In her words, “We do it for the love of art, for youth, for our people.”

Among other benefits, her work with GOJoven has provided her the opportunity to lead the Puerto Lempira platform. Due to their work, the members of the platform have continued to support Griselda and have since integrated the Youth Sector Network. She has seen these groups of young scholars develop, and has worked closely with them to achieve goals meriting the approval of the GOJoven board. “It’s very motivating. We have come very far,” says Griselda with a smile.

The professional who returned to her roots

At GOJoven, Griselda discovered the strength, skills and motivation to continue developing as a professional. For four years she studied law in La Ceiba, where she graduated as a laywer and returned to La Mosquitia to defend the most vulnerable population.

Throughout her time studying law, Griselda was fortunate to receive the support of the National Commissioner for Human Rights (CONADEH) and her supervisor at the national level there, Roberto Herrera Cáceres. After finishing her studies in La Ceiba, where she was also supported by the Faculty of Law, Grisela was able to return to her work at CONADEH, where she now serves as departmental delegate for Gracias a Dios.

“The result of my preparation at GOJoven is satisfactory not only for CONADEH, where I have been an advocate and educator, but also for the people of Gracias a Dios, because we approach human rights with the indigenous perspective,” says Griselda.

Above all, Griselda wants the fruit of her work to benefit the most vulnerable people of Gracias a Dios, which are the women and indigenous population. “I am committed to my people, the Miskitos. There are always obstacles – in our patriarchal culture, for example, men do not like it when a woman leads an organization. However, we must continue forward, sharing knowledge and defending the rights to work, equal wages, and lives without discrimination by gender, ethnicity, language, or religion.”

Like every mother who wants to see her daughters grow up in a Honduras without inequality, where humans are duly respected, Griselda hopes to see her dreams fulfilled so that her five-year-old twins can live in a better country.

“My dream is that in each corner people know what their rights are,” says Griselda firmly, “most importantly their reproductive, political, and healthcare rights.”

One of her most dear professional aspirations is to obtain a Master’s degree in human, civil, or indigenous rights. Griselda does not seek this academic achievement for vanity or profit, but rather because she wants to acquire more knowledge in order to have more impact for her people’s rights. “I want to put what I’ve learned into practice because this department is multicultural. Tawahkas, Pech, Garífunas and Miskitos all live here, but there still exists a lot of discrimination, and as such the rights of the indigenous people are violated.” Even when she returned to her Miskito homeland to defend the voiceless, Griselda still remembered her roots in the association the gave her so many opportunities for personal development. “GOJoven is always in my heart,” she says fondly.

This article is the first in a series of two articles produced by the author, Dunia Orellana, about the women leaders of GOJoven Honduras. It is a special series dedicated to National Women’s History Month, March 2018.