Under the auspices of the World Bank and the Sexual Violence Research Initiative (SVRI), Jinna Rosales as Executive Director of GOJoven Honduras and Bhupendra Sheoran as Executive Director of Youth+Tech+Health (YTH) attended the “Development Marketplace for Innovation on Gender-based Violence Prevention and Response” in Washington DC from April 16 to 20, 2018. In this high level event, they presented the new collaboration project ZonaSegura, which they will implement in Honduras with GOJoven International of PHI starting in June 2018 until December 2019.

ZonaSegura is a trauma-informed youth-centered innovative mobile solution to address teen dating violence in Honduras. Selected in February 2018, YTH in partnership with GOJoven Honduras and the GOJoven International program of the Public Health Institute (PHI) will begin to implement this project to prevent teen dating violence (TDV) through the provision of prevention information, healthy relationship education, and geo-location linkage to TDV services and resources. This new project will leverage the high rates of mobile phone usage among young women and girls (YWG) and men and boys (YMB) ages 14-19 in Honduras to assist them in overcoming individual and structural barriers to accessing rights-based and gender-sensitive TDV prevention information and services. 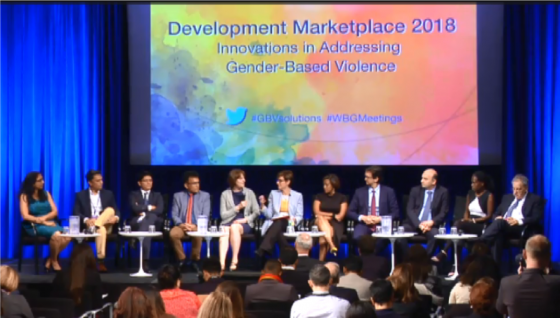 The “Development Marketplace for Innovation” was carried out in the framework of the International Monetary Fund and World Bank Group’s 2018 Spring Meetings in Washington DC. It included a full week of events that aimed to bring together and recognize the eleven winning project teams of the World Bank and SVRI’s open call for innovations in addressing gender-based violence prevention. More than 250 proposals from low and middle income countries were put forward for this call. The eleven winning teams hailed from Honduras (ZonaSegura), Colombia, Perú, Armenia, Camboya, Jordan, Kenya, Nepal, Papua New Guinea, Rwanda, and South Africa, with several innovative projects based on the theme (see here for the complete list). 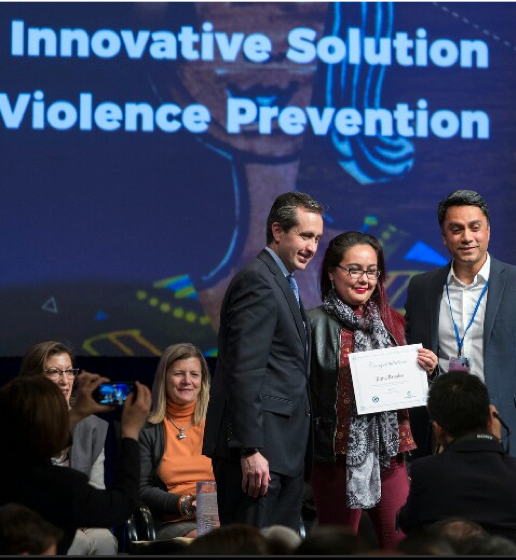 The teams were publicly recognized in an Awards Ceremony on April 17, where speakers included World Bank President Jim Yong Kim and the World Bank Senior Director for Gender Caren Grown, among others. Bhupendra Sheoran (Executive Director of YTH) and Jinna Rosales (Executive Director of GOJoven Honduras) were present at the awards ceremony, and the dialogue panel spoke about ZonaSegura before an audience of over a hundred different donors and governmental and non-governmental parties. The video of the event is available on the event page and was registered on Twitter with the hashtag #GBVsolutions

The other collaboration events during the week sought to: foster working relationships and the exchange of technical knowledge among participants, strengthen key skills applied to innovation and gender-based violence prevention projects, and support south-south learning. Rosales and Sheoran participated in workshops on these objectives that addressed conceptual frameworks on gender, monitoring tools, and research and evaluation methods. In addition, they presented the concept of ZonaSegura to journalists and donors with a focus on the Central American region, as well as on the Marketplace Stand with a poster and through informal dialogue with interested parties. They strengthened partnerships with the OPS and regional representatives of the World Bank, agreeing on collaboration priorities and opportunities supporting the prevention of gender violence that affects youth and women.

At the Marketplace Stand, dozens of interested people from other civil society organizations around the world as well as technical organizations and donors came together, all interested in tackling the prevention of gender violence in a country like Honduras that already has extremely high rates of widespread violence. They were also interested in the diverse range of sexual and reproductive health and rights issues of adolescents and youth that GOJoven Honduras manages, an association whose approach extends beyond sexual violence and dating violence to encompass comprehensive sex education, access to contraceptive methods and emergency comprehension, and adolescent-friendly health services, among other fundamental pillars of positive youth development. 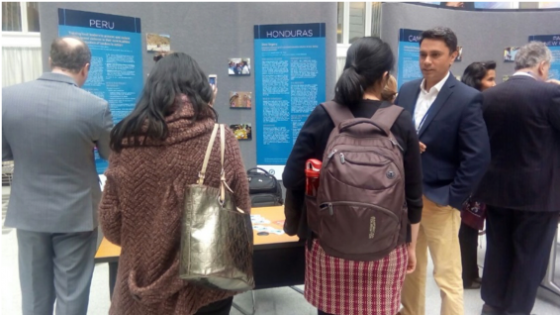 According to Jinna Rosales, “For GOJoven Honduras, ZonaSegura is a technological alternative for and from adolescents, and a tool that will boost their leadership to prevent dating violence. In this highly violent country, ZonaSegura is a challenge that seeks to become a reality and, in this way, increase the security of adolescents in the different localities of the country.”

By participating in this high level forum, GOJoven Honduras and its partner organizations equipped themselves with new tools – contacts, alliances, resources and visibility – that will strengthen ZonaSegura, both on the international and national scene, especially with only a few days until its launch in June 2018. To follow the project, become a fan of their Facebook pages: GOJoven Honduras, GOJoven International, and YTH.

Blanca Estela Ical Bolóm became a GOJoven Fellow at age 18.  She went to high school at the Mayan Educational Institution Ak Tenamit, Izabal where she focused on sustainable tourism. A dynamic, proactive, indigenous Queqchí woman, Blanca is seen as a leader within her community. She volunteered as a youth promoter in Ak Tenamit’s HIV […]