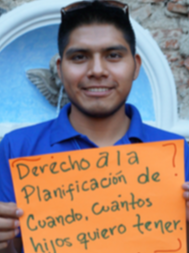 Marcos is 21 years old and is originally from the Buena Vista village in the Democracia municipality of Huehuetenango. He is in his first year studying Social Work. From an early age, Marcos saw and participated with his parents in activities that support community welfare. This not only influenced him to become a prominent leader with a vision of social inclusion and citizen participation, but also allowed him to be involved in different training spaces. He has worked with Tierra Nueva ONG, Municipal Youth Coordinator, Pop Noj ONG, Council of Mayan Peoples of the West, Network of Young Change Managers, CODEJUVE and currently serves as a GOJoven Guatemala Fellow. Marcos has been spotlighted by different media channels (i.e. radio, TV and social media) and in workshops, meetings and forums; and often presents information on sexual and reproductive health. One of Marco’s dreams was to work with the Municipal Youth Office, which has now come true. He worked with other alliances to open this space for the municipality’s youth, and he is currently the coordinator of the office. His desire now is to develop a public municipal policy in favor of children, adolescents, and youth.

Erikson Bersani Garcia’s professional experience includes working for the Autonomous Sports Confederation of Guatemala as a consultant setting up administrative processes and revising management policies.  He worked for the Guatemalan Ministry of Health’s Program on Young People as an advocate within the government, promoting a broader understanding of young people’s sexual and reproductive rights. Erikson […]